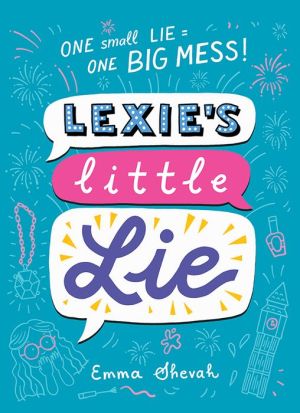 ...the story is full of heart and will resonate with Raina Telgemeier fans.—School Library JournalFrom the author of Dream On, Amber and Dara Palmer's Major Drama—one little lie equals one BIG mess!Lexie and her cousin Eleni are super-crazy-mega-extra-seriously close. They're like twins who aren't actually twins, if that's possible. But when Lexie tells a terrible, jealous lie, her whole family is split apart. It's up to Lexie to bring them all back together and fix her relationship with Eleni. After a few calamitous escapades, Lexie has discovered that there are all sorts of truths and all sorts of lies too...But can telling the truth be more hurtful than telling a lie?A Junior Library Guild Selection Praise for Emma Shevah: [This] novel is a charmer...While its humor and illustrations lend it Wimpy Kid appeal, its emotional depth makes it stand out from the pack. Molto bene!—Booklist, STARRED Review on Dream on, Amber Dara's larger-than-life personality and true-to-life middle grade issues command center stage until the curtain falls—School Library Journal, STARRED Review for Dara Palmer's Major Drama
Reviews from Goodreads.com