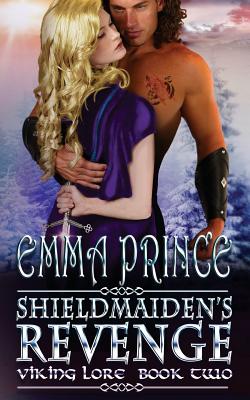 Step into the lush, sensual world of the Vikings with Shieldmaiden's Revenge (Viking Lore, Book 2):

Madrena burns hot for revenge against the man who attacked her village and shattered her life five years ago. When a dark-haired stranger named Rúnin washes ashore in her village, he promises to be her guide in exchange for his freedom. Though Rúnin knows the man Madrena seeks, his life depends on keeping her at a distance, lest her sharp gray eyes discover the secret he must protect at all costs.

Despite the danger, Madrena risks trusting Rúnin. The two travel deep into the Northland wilds, only to be entangled in a world of secrets and peril. Even as they resist the heat that crackles between them, the fires of desire rival those for vengeance. But when Madrena's plans are threatened, will the fierce shieldmaiden choose love over war? And can Rúnin save them both from their pasts?
Reviews from Goodreads.com