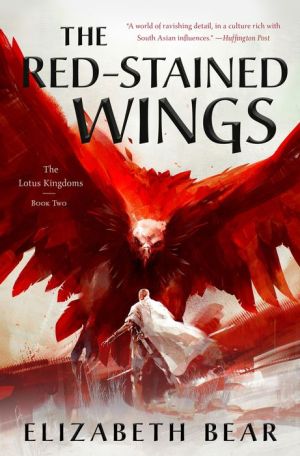 
Hugo Award–winning author Elizabeth Bear returns to the epic fantasy world of the Lotus Kingdoms with The Red-Stained Wings, the sequel to The Stone in the Skull, taking the Gage into desert lands under a deadly sky to answer the riddle of the Stone in the Skull.

io9―New Sci-Fi and Fantasy for May
The Verge―13 New Science Fiction and Fantasy Novels for May
The Gage and the Dead Man brought a message from the greatest wizard of Messaline to the ruling queen of Sarathai, one of the Lotus Kingdoms. But the message was a riddle, and the Lotus Kingdoms are at war.
Elizabeth Bear created her secondary world of the Eternal Sky in her highly praised novel The Range of Ghosts and its sequels.
The Lotus Kingdoms
#1 The Stone in the Skull
#2 The Red-Stained Wings
The Eternal Sky Trilogy
#1 Range of Ghosts
#2 Shattered Pillars
#3 Steles of the Sky