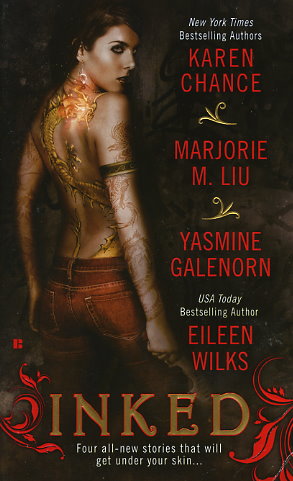 From today's most provocative authors come four tales of urban fantasy and paranormal romance exploring body art that is more than it seems-in a world of magic and mayhem that always leaves its mark.

"HUMAN NATURE"
Humans have long been aware of the others in their midst -- and not particularly happy about it. Until the Supreme Court's ruling, it was legal in several states to shoot lupi on sight. Times have changed. Some don't appreciate that. In "Human Nature," Lily Yu turns twenty-nine -- a marker she's decidedly ambivalent about. Her birthday celebration is cut short when the naked, heavily tattooed body of a man is found in a California town. At first it seems like a bizarre ritual killing, but there's more than magic afoot. The victim, Steve Hilliard, wasn't human . . . and years ago, he was Rule's Turner's closest friend.

(Note: If you're following this series, you need to know that the events in “Human Nature” occur before those in MORTAL SINS. It's April, four months after the Turning; Cynna and Cullen are still in Edge.)
Reviews from Goodreads.com