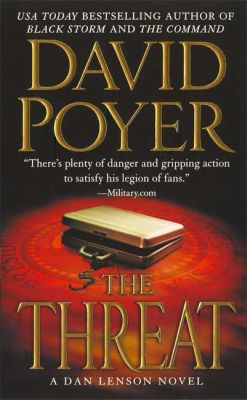 Medal of Honor winner Commander Dan Lenson wonders who proposed that he be assigned to the White House military staff. It's a dubious honor---serving a president the Joint Chiefs hate more than any other in modern history.

Lenson reports to the West Wing to direct a multiservice team working to interdict the flow of drugs from Latin America. Never one to just warm a chair, he sets out to help destroy the Cartel---and uncovers a troubling thread of clues that link cunning and ruthless drug lord Don Juan Nuńez to an assault on a nuclear power plant in Mexico, an obscure Islamic relief agency in Los Angeles, and an air cargo company's imminent flight plan across the United States.

Lenson has to battle civilian aides and his own distaste for politics to derail a terrorist strike over the Mexican border. His punishment for breaking the rules to do so is to be sent to the East Wing . . . as the military aide carrying the nuclear "football," the locked briefcase with the secret codes for a nuclear strike, for a president he suspects is having an affair with his wife.

And something else is going on beneath the day-to-day turmoil and backstabbing. As his marriage deteriorates and his frustration with Washington builds, Lenson becomes an unwitting accomplice in a dangerous and subversive conspiracy. The U.S. military is responsible for its Commander in Chief's transportation and security. If someone felt strongly enough about it . . . it would be easy for the president to die.
Reviews from Goodreads.com