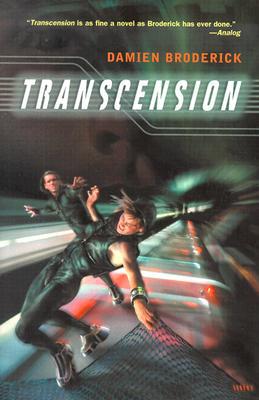 Damien Broderick has been a leading Australian SF writer since the ‘70s. His novel The Dreaming Dragons was listed in SF: the 100 best novels. His recent nonfiction book, The Spike, is a mind-stretching look at the wonders of the high-tech future. Now in Transcension he brings to life one of the futures he imagined in The Spike, a world pervaded by nanotechnology and governed by artificial intelligence. Transcension may be Broderick’s best book yet.

Amanda is a brilliant violinist, a mathematical genius, and a rebel. Impatient for the adult status her society only grants at age thirty, but determined to have a real adventure first, she has repeatedly gotten into trouble and found herself in the courtroom of Magistrate Mohammed Abdel-Malik, the sole resurrectee from among those who were frozen in the early twenty-first century, the man whose mind was the seed for Aleph, the AI that rules this utopia.
Mathewmark is a real adolescent, living in the last place where they still exist, the reservation known as the Valley of the God of One's Choice, where those who have chosen faith over technology are allowed to live out their simpler lives. When Amanda determines that access to the valley is the key to the daring stunt she plans, it is Mathewmark she will have to lead into temptation.
But just as Amanda, Mathewmark, and Abdel-Malik are struggling to find themselves and achieve their potentials, so is Aleph, and the AI's success will be a challenge to them and all of humanity.
Reviews from Goodreads.com