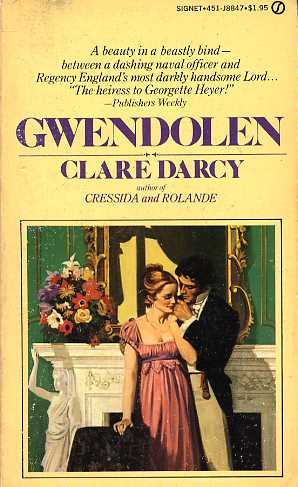 Lovely Gwendolen Quarters was thought to be a most level-headed Miss--until she met Captain Henry Belville of the Royal Navy. In the space of a few hours, Gwendolen lost her heart --and soon after promised her hand to this stranger.

Now Captain Belville was coming home from war to claim Gwendolen as his bride. But already stories about him had reached Gwendolen's ears. Was he really the man of her dreams? Or was he the crude and brutal oaf at whom men sneered and women laughed?

Gwendolen had wagered her whole life's happiness on a lightning bolt of passion--and now she had to face a fearful storm of doubt. And then, of course, there was the incredibly wealthy, maddeningly attractive Lord Lyndale to be considered....
---------------------------
UK Edition

It seemed certain that the Quarters' family fortunes were looking up. Gwendolen was to marry Captain Henry Belville RN after a curtship by letter, Jane returned from a glittering London season with a dashing Marquis in tow and Campaspe has always known that she would marry Neil Fairhall, her childhood sweetheart.

But to the despair of their parents the arrival of these suitors brings nothing but trouble. Gwendolen, trying to unravel a skein of tangled romances flings everyone into a riotous whirlwind of secret assignations, abductions and midnight elopements.