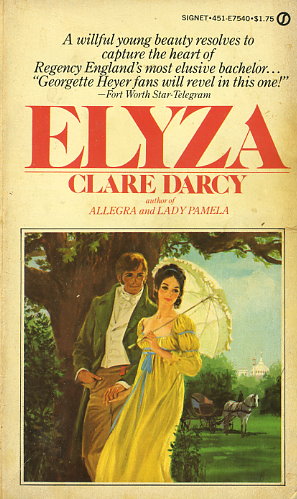 A YOUNG LADY IN DISGUISE -- AND A MAN OF DISTRACTING MYSTERY
Lovely Elyza Leigh was wearing the clothes of a boy and on the brink of a humiliating comeuppance at the hands of a crude innkeeper when she was rescued by handsome, elegant Cleve Redmayne.

But Redmayne, curiously, was not quite what he seemed. His fortune was fabulous, but its source was unknown. His manner was aristocratic, but his lineage obscure. His gallantry was irresistible, but his true feelings maddeningly elusive.

Elyza had long known what she didn't want -- namely an odious arranged marriage to the dullest of lords. But now for the first time she knew what she did want -- as she fell under the spell of this most dazzling and dangerous man, risking all in a game where kisses courted scandal, and love might mask a heartbreaking lie....
-----------------------
UK Edition

Unfashionably outspoken, inconveniently rich, Elyza Leigh was a disaster in London high society. In despair she disguised herself as a boy, ran away - and fell into the arms of a devastating stranger who whirled her into the breathless gaiety of a Brighton Season. In return he asked for her help in wooing the exquisite Corinna Mayfield. Elyza would have been delighted - had she herself not already fallen in love with him...