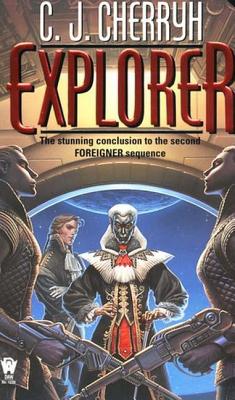 It has been nearly ten years since the starship Phoenix returned to the abandoned station orbiting the world of the alien atevi. This station, called Alpha, had been deserted for centuries following a rift between a faction of the station's inhabitants and the spacers' autocratic Pilot's Guild. For two hundred years this splinter faction had shared a fragile coexistence with the ate vi, living in isolation on the island of Mosphiera, communicating with the brilliant but volatile atevi by the use of a single highly trained diplomat, the paidhi, and trading technological information for continued peace and safety.

The unexpected return of the Phoenix has forever changed the lives of both atevi and Mosphierans, for over the ensuing decade, the captains of the Phoenix have brought both the atevi and their human counterparts into space. Their motivation seemed simple: Reunion Station, a human station in another sector of space, had been destroyed by aliens.

But on his deathbed, the senior captain of the Phoenix admits that he lied to the crew--that Reunion was merely damaged, not destroyed, and many people, including family and friends of the Phoenix crew may have survived. At this disclosure, the crew rebels and forces the Phoenix to undertake a rescue mission to Reunion.

But the crew and captains do not go alone, for on board are Bren Cameron, brilliant human paidhi, now representing Tabini-aiji, the atevi ruler, and Tabini's grandmother Ilisidi, the aiji-dowager, a fearsome, wily, and ambitious atevi leader with an agenda of her own.

Trapped in a distant star system with very little fuel left, facing a potentially bellicose alien ship, how can Bren help to avoid inter-species war when the notoriously secretive Pilot's Guild aboard Reunion Station won't even cooperate with their own ship, and may have kept the inhabitants of their own station ignorant of their true situation?
Reviews from Goodreads.com