With No Remorse — Cindy Gerard 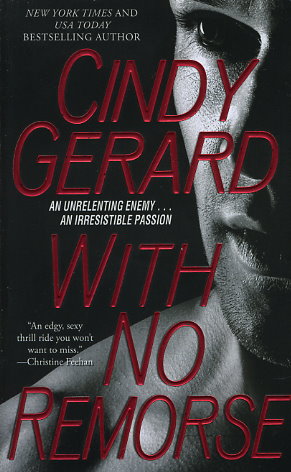 His quiet vacation in the Peruvian Andes turns deadly when a Black Ops, Inc. operative rescues a stunning stranger from a mysterious train robbery and discovers she's the target of a vengeful manhunt.

A DANGEROUS MAN
For Luke Colter, downtime is an illusion. He should know better than to ever leave his gun behind, especially since now he's risking his life to save world-famous supermodel Valentina.

A REBELLIOUS WOMAN
Val thought traveling incognito through the mountains would be the perfect cure for her bruised heart . . . until someone tries to kill her. Without knowing who is after her -- and why -- does she dare trust her irresistible protector?

A PERILOUS MISSION THAT COULD SEAL THEIR FATE
Luke's elite military training offers little defense against h-feelings for Val. When his BOI team links her ruthless enemy to the cutthroat global weapons trade -- and to a man from troubled past -- he'll do anything to save her. So when Val off herself as bait, will he make the right call . . . or surrender to t hold she has on his heart?
Reviews from Goodreads.com