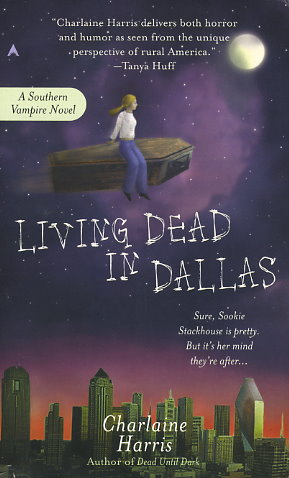 Cocktail waitress Sookie Stackhouse is on a streak of bad luck. First, her coworker is murdered and no one seems to care. Then she's face-to-face with a beastly creature that gives her a painful and poisonous lashing. Enter the vampires, who graciously suck the poison from her veins (like they didn't enjoy it).

Point is, they saved her life. So when one of the bloodsuckers asks for a favor, she complies. And soon, Sookie's in Dallas using her telepathic skills to search for a missing vampire. She's supposed to interview certain humans involved. There's just one condition: The vampires must promise to behave--and let the humans go unharmed. Easier said than done. All it takes is one delicious blonde and one small mistake for things to turn deadly...
Reviews from Goodreads.com

Living Dead in Dallas is the second book in the Sookie Stackhouse series by popular American author, Charlaine Harris. It effectively consists of two separate stories: one introduced and then put on hold while the other is played out. When she finds the body of the flamboyant gay cook at Sam Merlotte’s bar, Lafayette Reynold, in the bar car park in Andy Bellefleur’s car, Sookie is understandably upset. Andy’s sister, Portia, asks Sookie to “listen in” on bar patrons’ thoughts to learn who is responsible, but before she gets a chance to do much, an encounter with a vicious maenad leaves her almost fatally injured.

Saved by the local vampire nest, she is then directed, with her vampire boyfriend, Bill, to use her special talents for a vampire nest in Dallas. It seems that the Fellowship of the Sun, a group which is vehemently against any tolerance of vampires, may have something to do with the disappearance of a certain gay vampire in the nest. Infiltrating the group puts her in grave danger, but Sookie is ever resourceful, and is aided by certain shapeshifters.

In this book, Harris does a bit more world-building, but the details are seamlessly incorporated. She has Sookie acting as a sort of vampire security video, attending a sex party, encountering another telepath, attending a self-immolation and enjoying being kissed by three different males. There are plenty of laughs and quite a bit of sex, along with some development of the main characters. Lots of fun! 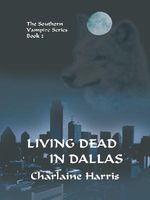