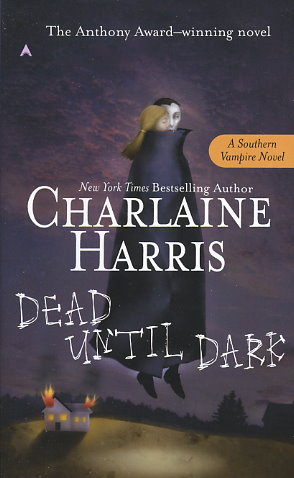 Sookie Stackhouse is a small-time cocktail waitress in small-town Louisiana. She' s quiet, keeps to herself, and doesn't get out much. Not because she's not pretty. She is. Its just that, well, Sookie has this sort of "disability". She can read minds. And that doesn't make her too dateable. And then along comes Bill. He's tall, dark, handsome -- and Sookie can't hear a word he's thinking. He's exactly the type of guy skids been waiting for all her life....

But Bill has a disability of his own: His a vampire with a bad reputation. He hangs with a seriously creepy crowd, all suspected of--big surprise--murder. And when one of Sookie's coworkers is killed, she fears she's next...
Reviews from Goodreads.com

The first book. I tried to read this before seeing the tv series and didn't like it at all. Giving it another try afterwards - loved it.

Dead Until Dark is the first book in the Sookie Stackhouse series by popular American author, Charlaine Harris. A cocktail waitress at Sam Merlotte's bar in Bon Temps, Louisiana, Sookie Stackhouse meets her first vampire when he sits as one of her tables. Bill Compton is trying to live in the mainstream since vampires "came out of the coffin" some four years before. Sookie has a unique (dis)ability that allows her to read minds, so she finds it quite refreshing to hear nothing at all from Bill's mind. But something she does hear from his drinking companions sees her actually saving his life (if that's possible with someone who is effectively dead until dark).

Bill has been restoring old Jessie Compton's house near the cemetery and close to Sookie's grandmother, Adele's house. His age and Civil War activity make him of interest to Adele and her friends, while Bill and Sookie can't deny an attraction between them. But Bill's vampire friends have Sookie concerned, and when young women start turning up strangled, with vampire bites on them, suspicion turns to the undead. Then another shocking murder has Sookie afraid for her own life.

This first book of the series introduces some of the regular characters and establishes some of the ground rules for the world Harris has created. Her heroine is a feisty woman, a likeable person with a strong sense of independence who is, nonetheless, not immune to a bit of romance. Readers who enjoy this installment will be pleased to know there are a further twelve books in the series, as well as four associated books. Vampire fun!

Love the show and love this book truly a good read.