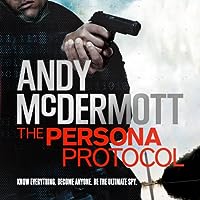 A high-octane start to a new series starring American agent Adam Gray. Filled with intrigue, adventure, and non-stop action, The Shadow Protocol is perfect for fans of Robert Ludlum and James Rollins.

NO ONE CAN KNOW HIM. NO ONE SHOULD TRUST HIM.
AND AMERICA WON'T SURVIVE WITHOUT HIM.

Adam Gray is a cipher, a disciplined loner conditioned not to betray a single emotion. Part of an elite team spearheaded by a brilliant neuroscientist, Gray is a covert agent armed with PERSONA, a device that allows him to copy the brain patterns of the terrorists and operatives he meets in the field. For twenty-four hours he can recall their memories. He can know every detail of their plans. He can be America's worst enemy -- before he's back to being Adam Gray again.

Now Gray and his team are racing to stop a plot to release a radioactive isotope that could kill millions. And in a nerve-racking clandestine meeting, Gray senses that his cover is cracked and that the mission -- not to mention his life -- may be in grave danger. But as they fight this violent conspiracy around the globe, another threat has emerged. This one has the perfect cover, the most unlikely double agent, and the most terrifying power of all. For a beautiful young scientist has discovered an unforeseen weakness in PERSONA: Adam Gray's own past.