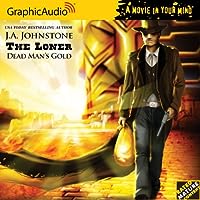 The son of legendary gunfighter Frank Morgan, The Loner is fast with his fists, faster with a gun, and haunted by the demons of his past. . .

With his wife's killers dead and buried, Conrad Morgan--known as The Loner--is on his way to Mexico for some peace and quiet. But on the way he's sidetracked by some intriguing travelers who are hunting down a valuable golden artifact. They're not the only ones who want to get a hold of the treasure. A running gun battle with some killers lands The Loner and his cohorts in the Jornada del Muerto--a hellish, waterless wasteland in New Mexico Territory. And now it's up to The Loner to get himself and his new friends out of this arid stretch of land before they perish from thirst. . .or lead poisoning. . .