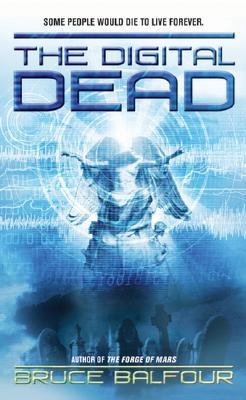 Bruce Balfour, the acclaimed author of The Forge of Mars, brings us to a future age in which artificial intelligence has blurred the line between he and death--with terrifying results,

Elysian Fields is a new company promising eternal life. Simply implant a computer chip at the back of your neck, and when you die an electronic copy of your personality will be able to live forever in a computer-generated heaven. But virtual versions of the dead can control the desires of those they've left behind--and also reveal priceless secrets.

NASA researcher Tau Wolfsinger and his archaeologist girlfriend Kate suddenly find themselves trapped in a conspiracy to take over the presidency. Centering around Elysian Fields, it involves the new religion of a virtual-reality Entity, eco-cultists who survive through cybernetic implants that allow them to photosynthesize--and an incredibly powerful and malevolent artificial intelligence. To get to the truth, Tau and Kate will have to face them all--as they prepare to cross the digital divide between life and death itself.
Reviews from Goodreads.com