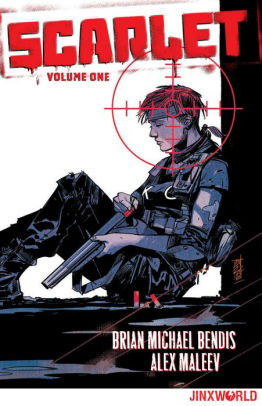 Power. Corruption. Lies. In a country much like our own, these forces were wielded against innocent people everywhere, and the spark that finally lit the fires of rebellion could have come from anyone.

But the new American Revolution began in the streets of Portland, Oregon--and it was Scarlet Rue who struck the match.

Striking back against the corrupt police who tore her life apart, Scarlet has become a counterculture sensation and the leader of an uprising that has reclaimed her city from the powers that controlled it. Now her insurrection is spreading, and the system--from the police all the way up to the president--will stop at nothing to smother it once and for all.

Can Scarlet control the chain reaction she has started? Or will her revolution end right where it began?

They transformed the superhero comic with Daredevil and hit new heights with Iron Man. Now the Eisner Award-winning creative team of Brian Michael Bendis and Alex Maleev reunite to give their acclaimed creator-owned series a brand-new beginning with Scarlet Vol. 1--a fearless political thriller that grows closer to reality every day. Join the revolution! Collects issues #1-5.
Reviews from Goodreads.com