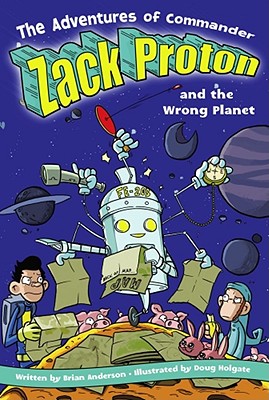 Can a planet just vanish in space?

According to the news, Zack's ship, the Risky Rascal, just dropped off sixteen million smelly pigs on the planet Bounceback. So Zack, Effie, and omega Chimp are hot on the trail! The only problem is, no matter how many star charts Omega Chimp downloads from the Astronet, they just can't seem to find Bounceback! It's almost like the planet is disappearing -- but planets don't do thatŠdo they?

What's worse, every planet these space heroes do manage to land on has pigs on it -- so how do they know which one is Bounceback?

To top it all off, a stinky stampede and a dry-cleaning disaster have left Omega with no space suit. And now he has to conduct this mission in his bunny pajamas! Can Zack and Omega get to the bottom of this planet problem before the Risky Rascal disappears again? And will Omega Chimp ever get out of his pj's?!
Reviews from Goodreads.com