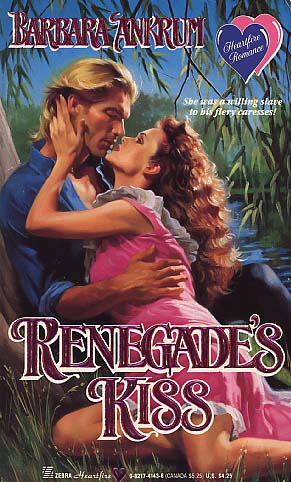 SHE COULDN'T LET HIM GO
Widowed and alone as the Civil War raged around her, ebony-haired Andrea Winslow was relieved when Jesse Winslow, her brother-in-law-and first love--arrived at Willow Banks farm. But when be told her be intended to sell the farm and head back to Montana, she trembled with fury. Andrea was determined to make a go of the farm, or die trying. But how could she stay mad at Jesse when his kiss made her shudder with desire and his touch melted her heart in ecstasy? Somehow, she'd find a way to keep the farm and Jesse too... starting tonight!

HE COULDN'T LEAVE HER BEHIND
Corn! Acre upon acre of the darned stuff! Jesse Winslow couldn't stand farming; that's why he'd left six years before and headed for Montana. And he'd head right back there, as soon as he could unload the family farm and find a husband for his brother's poor little widow. But when be looked into Andrea's violet eyes, tantalizing memories came flooding back until all Jesse wanted was to bold her in his arms and stroke her creamy curves until she begged for mercy, then claim her in passion's ultimate embrace.... over and over again!
Reviews from Goodreads.com