The Fifth of March — Ann Rinaldi 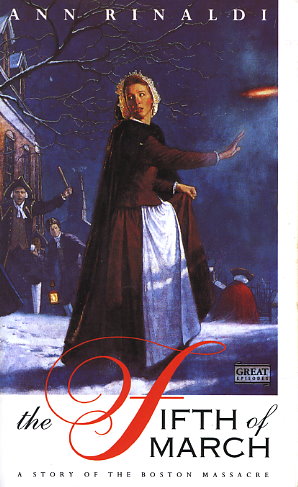 Skirmishes are a daily event in Boston as rebelling colonists bristle against increasing taxation and British military occupation. Fourteen-year-old Rachel Marsh is an indentured servant to the ambitious young lawyer John Adams. But her loyalties are divided when she befriends British Private Matthew Kilroy.

On March 5, 1770, hostilities are at a fever pitch. When the gathered crowd begins to riot, Matthew Kilroy leads the British soldiers in firing upon the angry Boston citizens.

Noted author Ann Rinaldi once again brings history to life, dramatizing a pivotal moment in the American Revolution and one young woman's search for her place in this emerging nation.