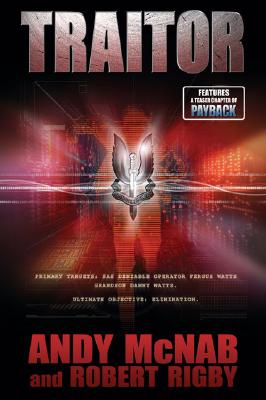 SAS HERO TURNS TRAITOR
For Danny Watts, 17, whose life-time ambition is to be a soldier, this news story is the beginning of the end.

THE WORST SORT OF SCUM
The grandfather he's never met, SAS hero Fergus Watts, sold out to the Colombian drug cartels and was supposed to have died, rotting in jail.

SAS TRAITOR MASTERMINDS PRISON BREAKOUT
Danny is determined to track down the man who has ruined his life. But how can he find an expert in covert operations who is trained to avoid capture?

As Danny makes his first move, so does someone else. Someone who has been watching Danny. Someone for whom Fergus Watts is a loose end which needs tying. Permanently.

The first book in the Boy Soldier sequence is an explosive, fast-moving and thrilling adventure, packed with authentic detail from Andy McNab's SAS expertise.
Reviews from Goodreads.com