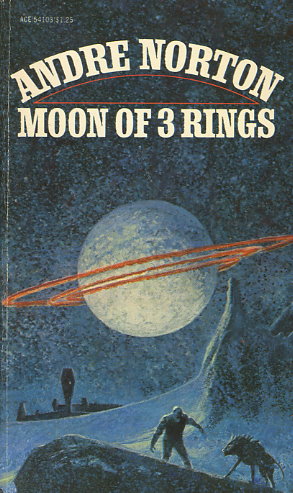 At the time of the Moon of Three Rings, the galactic trade ship Lydis lands on the planet Yiktor. On Yiktor, Krip Vorlund, a junior crew member, seeks amusement at a beast show. He is strangely attracted to the owner of the show animals, a delicate and mysterious woman, Maelen. When Vorlund is kidnapped by a Combine seeking to control the planet, he learns too well the nature of Maelen's sorcery; she transforms him into a wolfish creature, in which form he retains his own soul.

Between them -- Krip and Maelen -- they spin an eerie tale of dreams and visions, of metamorphoses and extrasensory perception, of timelessness and limitlessness.

The primitive world of Yiktor, evoked from myth and legend and ingeniously fused with the future, will be entered most receptively by readers acquainted with medieval heroes and mysticism. Even the singing prose rings with the cadence of legendary literature. --The Horn Book