When I Was You — Amber Garza 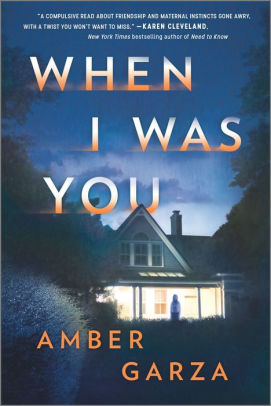 You meets Fatal Attraction in this up-all-night story of suspicion, obsession and motherhood. It all begins on an ordinary fall morning, when Kelly Medina gets a call from her son’s pediatrician to confirm her upcoming “well-baby” appointment. It’s a cruel mistake; her son left for college a year ago, and Kelly’s never felt so alone. The receptionist quickly apologizes: there’s another mother in town named Kelly Medina, and she must have gotten their numbers switched.For days, Kelly can’t stop thinking about the woman who shares her name. Lives in her same town. Has a son she can still hold, and her whole life ahead of her. She can’t help looking for her: at the grocery store, at the gym, on social media. When Kelly just happens to bump into the single mother outside that pediatrician’s office, it’s simple curiosity getting the better of her.Their unlikely friendship brings Kelly a renewed sense of purpose—taking care of this young woman and her adorable baby boy. But that friendship quickly turns to obsession, and when one Kelly disappears, well, the other one may know why.
Reviews from Goodreads.com