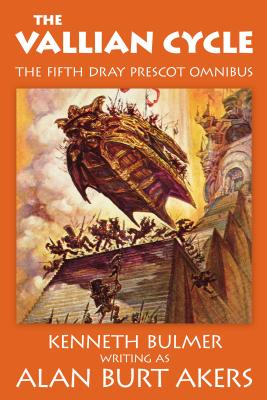 Four hundred light years from Earth, Kregen is a marvelous world, peopled by wonderful beings, filled with light and clamor and furor of life lived to the hilt. But Kregen has its darker side, where horror and terror bind innocent people, where sorceries rend reason, where injustice denies light.

Dray Prescot’s happiness with Delia, the Princess Majestrix of Vallia, is threatened as the notorious Wizard of Loh, Phu-si-Yantong, seeks to destroy Delia’s father and take control of the empire of Vallia. And Prescot is determined to seek the whereabouts of his daughters, alienated from him during his forced absence on Earth. But the brilliant world of Kregen under Antares will always challenge Prescot with new problems and adventures. Dray Prescot knows only too well that he must continue to struggle against himself as well as the malignant fates that pursue him in the mingled streaming lights of the Suns of Scorpio.

Secret Scorpio:
Courage and ingenuity has won Dray Prescot a high role in the Vallian Empire and a certain independence from the Star Lords. So when a mysterious monster cult begins to undermine the empire and when his own beloved princess becomes a victim of those secret schemers, Prescot has to go into action.

Savage Scorpio:
Somewhere in the unmapped regions of Kregen lies the hidden city of the Savanti. Dray has long sought the locale of his original landing and now the time has come when the search must be completed without delay, for the father of his beloved Delia is a victim of assassins. Only the Savanti can undo the evil that could shatter all that Dray holds dear in his second planetary homeland.

Captive Scorpio:
Prescot has risen high in the empire of Vallia, but luck cannot always sustain him. All the forces opposed to his lands, his princess, his emperor, and to him personally, converge to bring about the darkest hour of his long career. With his back to the wall, Dray Prescot faces that time of peril with unflinching will... until the cruelest blow of all is struck: his warrior daughter Dayra rode in the vanguard of his foes!

Golden Scorpio:
When you're down there's no place to go but up. That's the way the brave think and if there is anyone on two worlds braver than Dray Prescot, he has yet to appear. Prescot would never give up. Single-handedly, if need be, he would be a deadly threat to the enemies of Vallia. But as he sets out on a liberation mission incomparable in the history of two worlds he knows he will never be alone...

This edition contains a glossary to the Vallian cycle.
Reviews from Goodreads.com