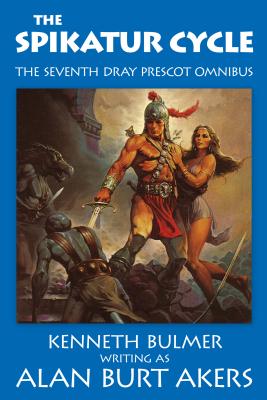 Four hundred light years from Earth, Kregen is a marvelous world, peopled by wonderful beings, filled with light and clamor and furor of life lived to the hilt. But Kregen has its darker side, where horror and terror bind innocent people, where sorceries rend reason, where injustice denies light.

The Spikatur Cycle brings Prescot closer to the realization of many of his dreams. He is determined to do what he feels is laid upon him; but he finds it is not so easy, particularly when the Empress Delia and his comrades are determined to keep him out of trouble. But, he is Dray Prescot, Lord of Strombor and Krozair of Zy, and that canny old leem hunter will not be prevented from buckling up the brave old scarlet breechclout and hurtling off beneath the Moons of Kregen into fresh headlong adventure with a sword in his fist...

The marvelous adventures of Dray Prescot on Kregen, the world of wonders that orbits the twin suns of Antares in Scorpio, have become a science fiction saga to rival and perhaps surpass the works of Edgar Rice Burroughs and others of the heroic fantasy band.

Beasts of Antares:
Dray Prescot, lone Earthman, once a pawn of cosmic powers, rallies the warriors of Vallia for a final stand against the foes that encircle them. Then, in an act of true Prescot bravado, undertakes single handed to rescue three old friends from slavery in a distant land. The beasts of Antares are many and terrifying, but Prescot does not belong to the faint hearted and he will need every ounce of courage this time!

Rebel of Antares:
At last Prescot has come in sight of his goal to overthrow the slavers and their evil empires, that he shares with the Star Lords. On the island kingdom of Hyrklana his course now seems clear: overthrow its decadent queen, lead a rebellion against the cruel Arena, and free the princess who is its rightful ruler. It is a hard task, but for Dray Prescot, against whom sorcerers and swordsmen have contended, it is the only course he could follow.

Legions of Antares:
For too long the iron legions of the evil empress of Hamal have devastated the neighboring lands and islands of Kregen. Dray Prescot has battled Empress Thyliss all the way, and at long last finds himself nearing the end of his long campaign. Gathering about himself old allies and former enemies, Dray prepares to challenge the empress at the very doors of her capital city, until he discovers that she is about to spring her secret weapon: the super-science of the mad wizard of Loh.

Allies of Antares:
Dray Prescot has made himself into a rallying point of strength on Kregen. Now, after the worst war between the humanoid lands has finally concluded, Prescot again confronts the Star Lords, only to learn that the hard won peace is just a transition to a great hemispheric invasion that was even then raiding over the horizon.

This book contains a glossary of the Spikatur cycle.
Reviews from Goodreads.com