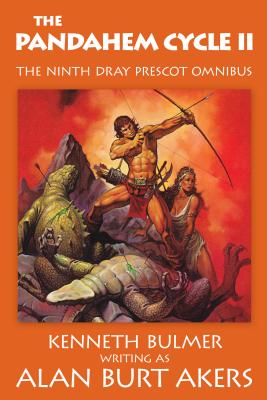 Four hundred light years from Earth, Kregen is a marvelous world, peopled by wonderful beings, filled with the light and clamor and furor of life lived to the hilt. But Kregen has its darker side, where horror and terror bind innocent people, where sorceries rend reason, where injustice denies light.

Down in the island of Pandahem, Prescot and his comrades, having burned a temple or two, must now press on and open a fresh campaign against the Silver Wonder. Of course, life is not as simple as that, particularly on the horrific and fascinating world of Kregen where, under the mingled streaming radiance of the Suns of Scorpio, the unexpected is always to be expected.

Talons of Scorpio:
Finishing the job of destroying the hideous cult of the Leem is just one of the problems confronting Dray Prescot. For he must also rally all the world's forces to combat the onslaught that is on its way from the unexplored Southern Hemisphere. While rescuing kidnapped children from the altars of sacrifice, Dray finds himself fighting side by side with his own worst enemy, his renegade daughter, Ros the Claw, who has pledged his death.

Masks of Scorpio:
The task of burning out the cult of the Silver Leem had been given Star Lords priority. Although Dray Prescot was emperor of Vallia, still he has to work incognito on an enemy island until that task is done. Aided by a valiant crew of piratical swashbucklers, Dray invaded the capital of the secret order only to find treachery and terror where he had thought to find treasure and triumph. It became a battle of golden masks against silver masks, and behind each facepiece could be hiding the bony features of the Grim Reaper himself!

Seg the Bowman:
Dray Prescot's fighting comrade, Seg, is the finest archer in two worlds. Seg is a wild and reckless fellow, courageous in the face of any adversity, and this is the account of his greatest challenge. On an enemy island, Seg becomes knight-protector of the mysterious lady Milsi, and by her side he beats off frightful beasts and inhuman foemen intent on blocking her path to a rightful royal inheritance.

This edition includes a glossary of the Pandahem cycle and the short story “Green Shadows”
Reviews from Goodreads.com