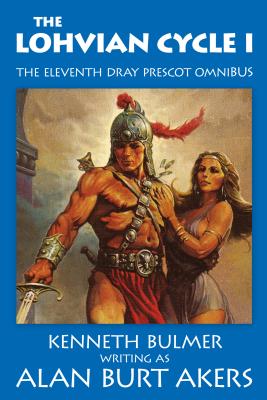 On the magnificent and mysterious, beautiful and terrible world of Kregen, a planet orbiting Antares four-hundred light-years from Earth, much may be achieved and much lost. Far more than merely a strong sword arm is required for victory. Far more than a cunning and devious brain is needed to secure success.

Having won his princess, Delia of Delphond, Delia of the Blue Mountains, and having become the Emperor of Vallia with Delia at his side as Empress, Dray Prescot has renounced the crown and throne. Any thoughts of a quiet life are foolish, as he well knows. Among the many problems besetting him, the most important are uniting the lands of Paz and beating off the viciously hostile raiders from over the curve of the sea, the feared and hated Shanks.

Scorpio Reborn:
Sent by the Star Lords to save a life from a fire, Dray Prescot finds himself utterly helpless in a strange land. Confused and unable to move, he is cared for by Mevancy, a woman with a strange and wonderful secret. But why have the Star Lords left him there? Who is he expected to protect, and how is he supposed to do it? Flying a kite one moment, battling through an inferno the next, Prescot is flung headlong into fresh adventures under the mingled streaming lights of the Suns of Scorpio.

Scorpio Assassin:
The Star Lords require that a high spirited lady called Kirsty be queen, and have ordered Leone killed so that she cannot return through reincarnation. With the aid of the kregoinya Mevancy nal Chardaz and of the kregoinye Caspar the Peaker, and with the assistance of Trylon Kuong and of Llodi the Voice, Prescot decides to risk all to defy the all-powerful Star Lords...

Scorpio Invasion:
Dray Prescot must answer to the Star Lords for his disobedience. But the Star Lords argue over him and Dray is dropped accidentally in a walled garden. He is lost. Even the Star Lords don't know where he is. He knows he is on the splendid if horrific planet of Kregen, and in the continent of Loh, but nothing is familiar. He must find his way back to Makilorn, and from there to Tarankar to train an army to repel the Shanks...
Reviews from Goodreads.com