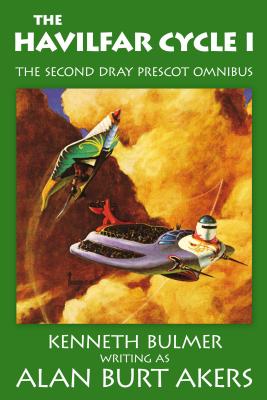 Together, the three books in this volume make up the first part of the Havilfar Cycle of the Saga of Dray Prescot of Earth and of Kregen.

Dray Prescot is launched headlong into a brand-new series of adventures upon the planet of Kregen, that marvelous and beautiful, mystical and terrible world four hundred light-years away beneath the Suns of Scorpio. A new life opens for Dray, but that new life is cruelly different from all he expected and dreamed, hurling him into fresh adventure and danger among peoples and places far removed from those he knows and loves.

Dray Prescot's saga has been aclaimed as the best planetary adventure series since Burroughs stopped writing about Barsoom.

Manhounds of Antares:
Will Dray Prescot be able to remain a prince of proud Vallia or will he become just another human victim of the hunters and manhounds of the mysterious Southern Continent? For that is the enigmatic fate that the Star Lords have suddenly confronted him with. They want someone freed from the terrified pack of human prey among whom Prescot finds himself. But who it is and how it is to be done, they have left to Dray to work out...

Arena of Antares:
Never a man to leave something half done, Dray Prescot knows his task on the mysterious continent of Havilfar is far from complete. There are cruel conquerors to be overthrown, the pursuit of the manhounds and their masters to continue, and there is the dreaded arena. Can he survive the life of a gladiator against the killers and monsters of a spoiled queen while the Star Lords wait for his mission to continue?

Fliers of Antares:
Dray Prescot confronts his most baffling task while he is a hunted and harried wanderer of the continent of Havilfar. That task is to discover the means by which the aircraft of that continent's most advanced civilization operate. Prescot is no scientist, but fulfill his task he must or he will never return to the princess and homeland he has won. So, for Dray Prescot there is but one course. With a whole continent against him, with time itself conspiring to balk him, the secrets of an unknown science must be made his...
Reviews from Goodreads.com