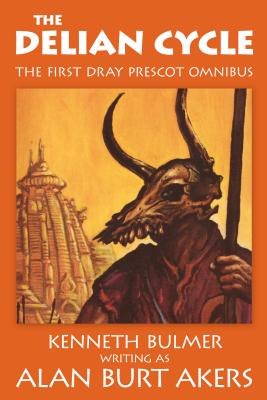 The first five books in the Saga of Dray Prescot of Earth and of Kregen are brought together in this omnibus edition. Together, they make up the Delian Cycle, in which Dray Prescot comes to terms with the alien world of Kregen. Here he tries to make sense of his situation: the Star Lords, the Savanti, the marvelous places, strange beasts and stranger people. And here he pursues his greatest love of two worlds, Delia of the Blue Mountains.

Dray Prescot's saga has been aclaimed as the best planetary adventure series since Burroughs stopped writing about Barsoom.

Transit to Scorpio:
On the planet Kregen that circles Antares, the brightest star of the Constellation of the Scorpion, two forces contend for the world's destiny. One of them, the Savanti, called in a human pawn from far-away Earth. His name is Dray Prescot, and only the Savanti know his role. But it soon turns out that Dray Prescot himself has to make a decision that will change him from a mere pawn to a bolder piece on the planetary chessboard...

The Suns of Scorpio:
Slave of the colossus builders or scourge of the Inland Sea? Both roles await Dray Prescot on his return to Kregen. Torn between two contending forces, the Star Lords and the Savanti, Prescot himself wants only to find his beloved Delia of the Blue Mountains. But the powers that had drawn him across interstellar space to the world that orbit the red and green suns have set him a task, the nature of which even he cannot fully comprehend...

Warrior of Scorpio:
Dray Prescot finds himself torn from the battles of the Inner Sea for a mission in the air. For it is now his mission to carry his beloved Delia by airboat to that far kingdom, Vallia, from whence she had come. But the route lies across the gaunt mountains and the shadowy jungles of the Hostile Territories, and there Dray will be plunged among stranger peoples and more fantastic challenges than even his Kregen princess has known.

Swordships of Scorpio:
What does a man do when fate makes him the protector of the royal head of the land of his enemies? If he is Dray Prescot he sets aside his quest to reach Vallia and his princess Delia and help her claim her throne. But his duty is to defend Vallia's ancient foe and place its rightful heir on its throne. So when the pirate fleets known as the swordships come between the two contending demands, Dray sees that only by following his own personal star could the contradiction be resolved.

Prince of Scorpio:
Dray Prescot has fought long and hard through perilous lands to claim the hand of the heiress to the mighty Vallia. Yet, when finally he sets foot in that long-sought empire, it is not as hero or noble. It is as an unknown, a mendicant, and finally as a condemned slave...

This edition contains a map and glossary.
Reviews from Goodreads.com