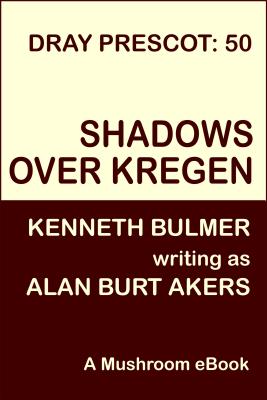 Dray Prescot has been chosen by the Star Lords to bring all the lands of Paz together, as the so-called Emperor of All Paz. Together they must resist the deadly Shanks who raid from over the curve of the world. Delia and Dray Prescot have abdicated the throne of Vallia and now seek to make the dream of a united Paz come true. Whether Prescot is battling slavers and freeing slaves with the Kroveres of Iztar, or fighting Fish-heads in the land of the Shanks, he is certain to be thrown into more headlong adventures under the streaming mingled lights of the Suns of Scorpio.

Shadows over Kregen is the fiftieth book in the epic fifty-two book saga of Dray Prescot of Earth and of Kregen by Kenneth Bulmer, writing as Alan Burt Akers. The series continues with Murder on Kregen.
Reviews from Goodreads.com